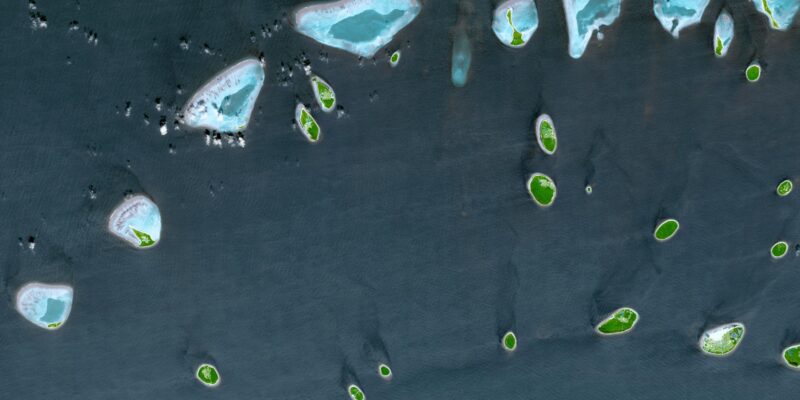 By publishing a simulated natural-color images that shows part of Thiladhunmathi taken by the Terra satellite, NASA sends a clear message about recent environmental changes in the Maldives.

NASA, the world’s most popular space agency, has tweeted a photograph of Alaska and the Maldives taken by NASA’s Terra satellite’s Advanced Spaceborne Thermal Emission and Reflection Radiometer (ASTER).

The image shared by NASA shows some parts of Haa Dhaal Atoll and Some Parts Shaviyani Atoll.

The Soil erosion has been a major problem lately that the most of the island experiences.  While erosion is a natural phenomenon, climate change hazards can intensify its effects. Erosion may also be triggered by human activities such as harbor construction and land reclamation, which change the coastal climate. This has the potential to disturb the normal equilibrium of processes along the coast. Such human practices include the clearing of trees for the purpose of settlement.

This is problematic because vegetation stabilizes the sand and reduces the effects of heavy winds. Local residents often remove corals from beaches, which increases the effect of waves and currents, and therefore flooding, since coral reefs serve as natural breakwaters.

Maldives are particularly vulnerable to the effects of climate change due to its geographical location. Since the country has little land and is low-lying, it is vulnerable to worsening weather conditions such as inundation, high waves, and storm flooding. The Maldives is now at risk of sea-level increase as the polar ice caps melt. By the year2100, future sea levels are expected to increase by 10 to 100 centimeters, implying that the whole country may be flooded in the worst-case scenario.

Authorities and residents must devise strategies to respond to future climate changes and their consequences. That is why it is so important for people to gain knowledge about how to adapt to climate change.