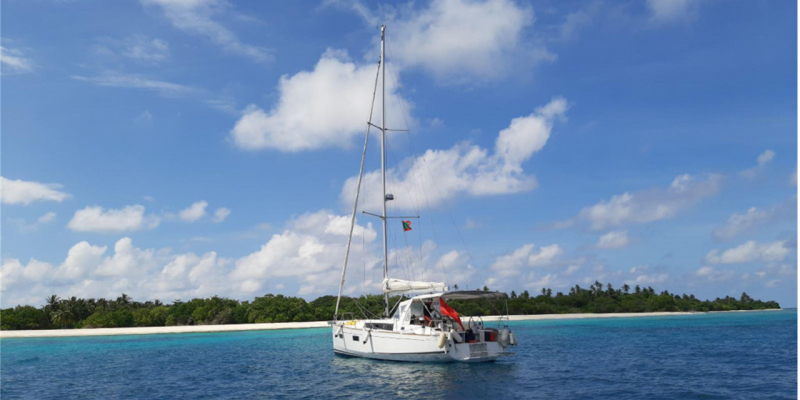 After the slowly deprived tourism all around the Maldives due to COVID-19, it has already started to kick in along with the borders opened in the Maldives. After a long wait, a yacht had been ported at Ha.Uligam today.

The member of Hoarafushi constituency Mr. Ahmed Saleem has confirmed that a yacht had been ported at the port of Ha.Uligam.

He also added that, this is something which would benefit the whole island along with the whole atoll and he sees this as a very happy and prosperous picture. Also, since the government had taken the initiate to develop a city hotel and a yacht marina is a very important work which is being initiated by the government.

News from the locals in the island states that, this yacht belongs to a Chinese company and the yacht consists of chinese nationals.

Uligam council has started some important work to increase the amount of yachts porting near Uligam. Therefore, in order to increase the amount of people who would bring their yachts, Uligam council has also participated in the Yacht fair conducted by the Maldives Customs Services as early as in the month of Januray 2020. This conference was a bridge to be linked between the yacht operators and the responsible offices in the yacht business.

Uligam council has also paid a visit to the economic committee of the People’s Majilis and raised their concerns as well.

As a result of these tireless works, they have reduced the amount of tax that needs to be paid by the yachts that visit the island. The vice president of the council states that the next problem in the line is about the tourism fees and this needs to be adjusted legally. And the members of the island is working to reduce this as well.

Last Sunday, Ministry of Tourism has already opened for bidders to bid to open a Tourist city hotel and the yacht marina in Ha.Uligam where the government had given a vast area of 36 hectors of ground to cover it and develop. The ministry had also asked to apply via the ministry’s website for interested parties.