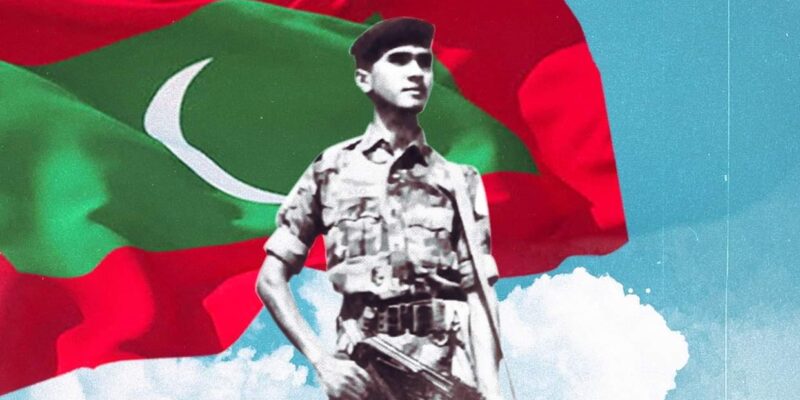 In every situation our country has gone into with invaders invading, heroes who are young adults from Thiladhunmathi as stepped up to bring the countries independence to its people.

For this reason, Thiladhunmathi will always be a proud part of the island nation. The people of Thiladhunmathi is always keen to follow the regulation of the beloved Islamic values, who also had good ethics, and who loved the peace and serenity. The patriotism in the veins of Thiladhunmathi people are un matched for any of the rest of the people in the country.

Early morning of 3rd November 1988 was indeed not the peaceful sunrises the capital of Maldives saw. The fear that brought upon the Maldivians by a military group of Srilanka along with betrayers of the country came to Maldives to basically rob the country and keep it as them. As soon as they touched on Maldivian soil, their aim was to get the whole country and keep it as theirs.

At the first bullet which was fired at the then National Defense Force was countered by a non other than National hero from Thiladhunmathi Kulhudhuffushi, Shaheed Hussain Adam.

Corporal Hussain Adam was posted to one of the two outdoor security posts responsible for the security of the main gate of MNDF Headquarters. When the insurgents approached to take over the building, he immediately responded with a burst of bullets, stunning the insurgents who has planned for a surprise attack at dawn. His response was the initial counter attack from the Headquarters. He held them back for as long as he could, until he succumbed to the firing after his bullets ran empty. This gave the soldiers inside the Headquarters sufficient time to prepare for a counter attack. Though he ran out of bullets, he kept demanding for extra magazines till his last breath.

Today, Martyr Hussain Adam is one of the biggest national heroes of all time, for his excellent presence of mind and his fearless courage during the terrorist attacks of 3 November 1988.

He is the hero which the later generations always talked about and whom where Thiladhunmathi is so proud of. His actions basically made the invaders lose their footings and mislead their plans astray.

Hussain Adam, born in 1968 to Kulhudhuffushi was martyred at an early age of his life, being the shield of independence that we see today. His sacrifice to the country would not be ever written or talked with just. The day which he became the hero for all of us, November 3 is known as the Victory day he brought for us with his bravery.

His actions that day, his bravery is to be noted down by every single youth of this country today. His sacrifice is to be talked and remembered not only by the people of Thiladhunmathi. He is indeed the hero of the current generation of Thiladhunmathi. I ask the almighty to grant him the status of Shaheed and the eternal paradise. Ameen!