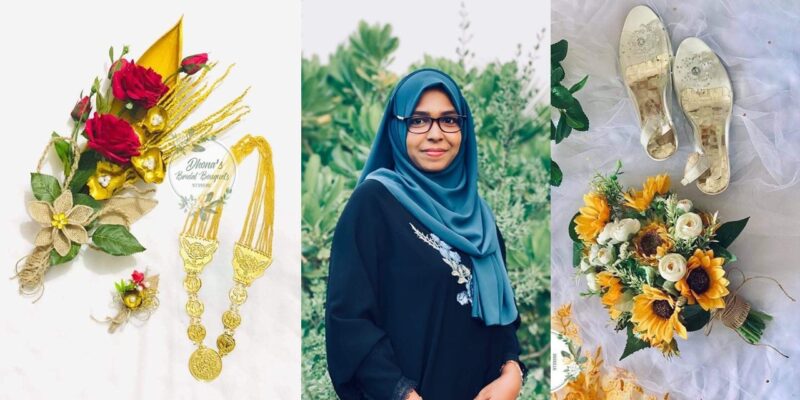 Marriages that done in Maldives are coming of with a lot of businesses these days. When it comes for the artistic minds, now a days every thing can be connected, thus Maldivian marriages are filled with these talents. From wedding photography to the back drop. Even the dinners are these days decorated. This time, we are going to talk about the bouquet held by the brides.

H.Dh Kumundhoo Ziyaadha Hussain, also known as “Dhona” is one such artist who shows her talent by making the bridal bouquets in line with the wedding dress.

Dhona gave us an all inclusive talent on how she got introduced to the field. She said that at first, she participated in a culinary course where they taught how to bake cakes. She said that the person who taught them was also someone who made flower bouquets as well. She added that this was the glimpse of interest she got from which later became a well known business for her.

Dhona is also a day job nurse as well. She has already completed her nursing diploma and she is pursuing her Bachelors in this field as well now.

Bridal bouquet by me🌹💖 Currently taking orders for November and December 2020 weddings. DM/viber 9739590 to place your orders. 😊 #dhonas #bouquets

Dhona started to pursue these works as a business in 2014. She has been consistent in her work for almost 6 years now and she says that her recipients would add up to 3000. She has already made a name of making these arts and there is no questions to be asked on her talents now.

😘😘❤️ bridal bouquet by me for this gorgeous bride. DM/viber 9739590 to place your orders😊 currently taking orders for November and december. Photo: @zippophotographer

She also get orders from a lot islands, and so far she has been working on them and had delivered as well.

Customised Bridal bouquet by me for this gorgeous bride🧡💚 DM/viber 9739590 to place your orders.

Dhona states that the most difficult thing she faces in this business is that the products she needs for her arts are scarce. For example, some colors of flowers are very rare, and some ribbons as well. And she also had to bring stuff from Srilanka as well. She also stated that her business was also very much affected due to the COVID-19 pandemic.

She stated that the day she would want to see in this business is a day where everyone would know about “Dhona’s bridal bouquet”. So far she says the reason why she is being able to work in this field is non other than because of her supporters and fans. If you would want to see Dhona’s more work, please feel free to visit her Facebook page “Dhona’s bridal bouquet” or her Instagram ID “dhonas_bridalbouquet”.