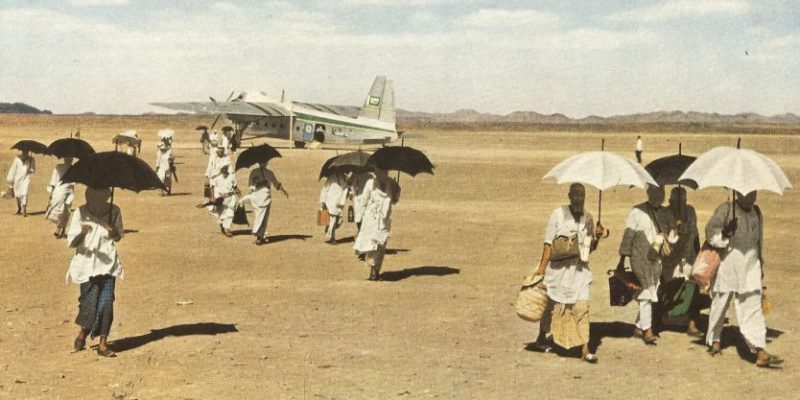 This is a tale about the first time a group of Maldivians flew to Saudi Arabi for Hajj pilgrimage.

My great-grandparents, Manadhoo Haaroon Haaji Kilegefaanu and Aishath Qasim, along with my grandfather Qasim Haroon (Manadhoo Kasin Haaji), were a part of this historical journey. In addition, Dhidhoo Ibrahim Kaleyfaanu (DIK), Nolhivaram Dhon Ali Katheeb Kaleyfaanu and his wife, and Villa Chairman Qasim Ibrahim’s father, Maamigili Ibrahim Muhammad Fulhu and a few other elites of the time took part in the trip.

The year was 1960 and these fortunate people flew to Hajj on British Passport. My great-grandfather had performed Hajj back in 1928 as well. After the first pilgrimage, he was called “Haroon Haaji” and fondly, “Haaji be” by locals of the island. The islanders looked up to him, as he was regarded as a man of nobility. After he was made a chief by the government, the title of “Kaleyfaanu” was added to his name. In his first Hajj journey, he was a part of the 23 ‘Haaji’s’ was completed the pilgrimage alongside Sheikh Hussain Salahuddin. The travelogue, “Safaru Naamaa Eh Hijaaz” by Hussain Salahuddin detailed the events that took place during the pilgrimage journey.

Stories from the trip has been the ultimate hand-me-downs in our household. One particular story, however, piqued my interest. It was about a man in my grandfather’s pilgrim group who was not able to ‘get’ the blessings of Hajj. 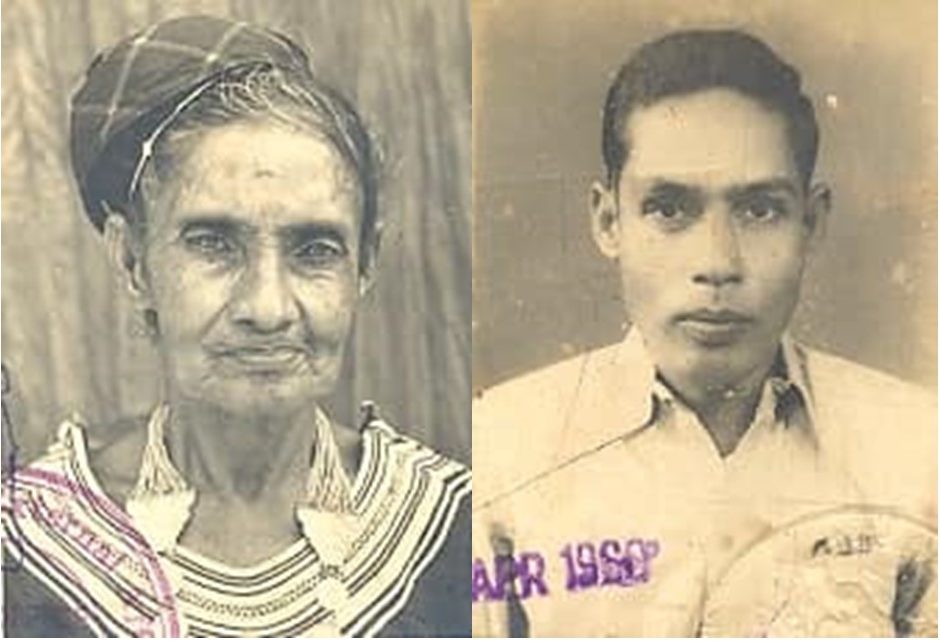 There was a man, whome my grandfather dubbed ‘Fandiyaaru Manikufaanu’ who always carried a handkerchief with him. On one occasion, while he was walking around Masjid Al Haram, he dropped it on the dust enveloped floor. A man standing next to him immediately picked it up, and after dusting it off for a few seconds, handed it over to ‘Fandiyaaru Manikufaan’.

The man, in good humour muttered, “It’s unfortunate how grubby the place really is.”

Exasperated, Fandiyaaru Kaleyfaanu replied, “Please do not say that! We are not here to get acquainted with the materialistic aspects of this place!”

According to my grandfather, the man did not ‘receive’ that year’s Hajj. ‘Fandiyaaru Manikufaanu’ was what the group of pilgrims use when addressing Sheikh Hussain Salahuddin. 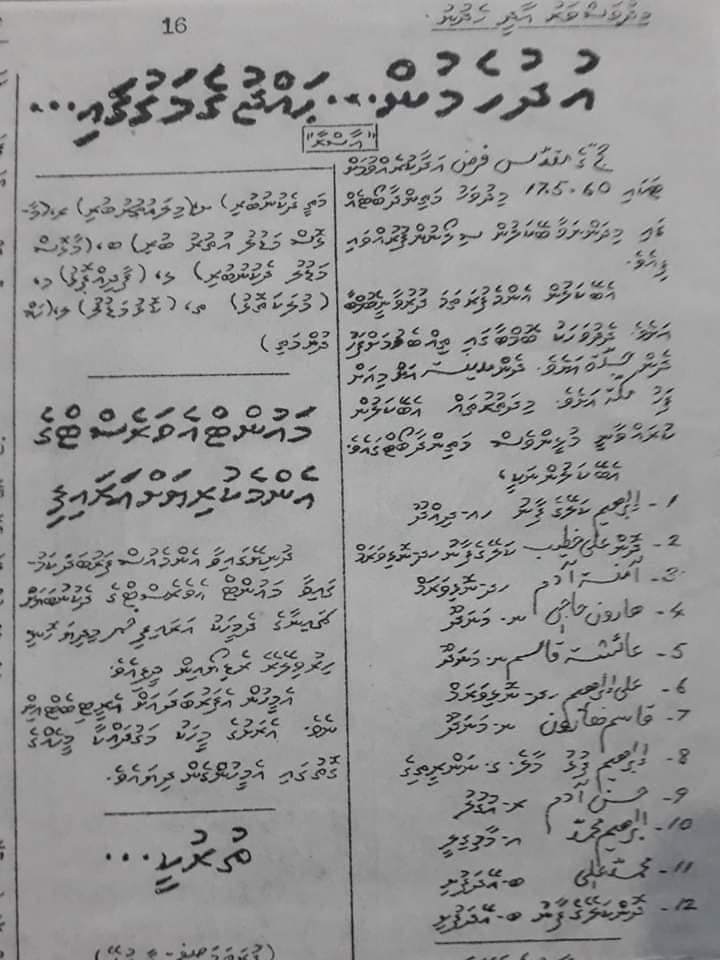 While my great-grandparents were one of the first Maldivians who flew to Hajj, my grand father joined them as a caretaker. Similarly, Nolhivaram Dhon Ali Khatheeb and his wife was joined by their relative Nolhivaram Ali Ibrahim. Later in history, Ali Ibrahim will be named an atoll chief as well. My grandfather and Ali Kaleyfaanu were the youngest members who took part in the trip.

This historical moment was recorded in a newspaper named ‘Mi Dhuvasvaru’ which was published during the 1960s. The newspaper was a creative product of Maadhooge Ali Ahmed. The news about the Hajj trip was written by ‘Aasra’ which was the pseudonym of Karankaamaage Mohamed Rafeeu. He was a renown writer and a seasoned poet. Aasra’s poems are a famous sensation within the country. One of his most popular poems were ‘Aminuge Zikuraa’ which was based on President Amin Didi’s rule.

Aasra’s article about the first Maldivians who flew to Hajj was titled, ‘Udhuhemun..Hajj ge magugai’ which can be roughly translated to ‘Flying…in the journey of Hajj’. A translated quote from the article goes, “In order to perform the blessed act of Hajj, the following men began their journey to Ceylon on May 17, 1960. Their first transit will be at Bombay. After the two day transit, they will fly to Jedda. From there, it will be a short stop at Medina and then Mecca.”

This proves to be an evidence of the trip. Another unavoidable proof is my grandfather’s passport and great-grand parents’ passes. My uncle Ahmed Haneef took the responsibility of keeping the memento in a safe space. Even though he is a special-needs person, he fondly cares for heirlooms and keepsakes belonging to the family and is the reason why this historical piece of evidence exists till date.

The journey to Mecca began on April 12, 1960, on an engine boat named ‘Maldive Star’, sanctioned by the government. The first stop was Sri Lanka. During that time, Maldivians who traveled back and forth Sri Lanka carried a small book called a ‘pass’, provided by the Ministry of External Affairs of Maldives.

The pilgrims reached Ceylon (Sri Lanka), on April 14, 1960. The British passport provided to my grandfather was issued on April 25, 1960. The passport had a 5 year expiration period and can be used to visit any commonwealth country without an issue. It was when the pilgrims flew from Ceylon’s Ratmalana Airport to Madras, India, the passport was used for the first time. This took place on May 17, 1960. From Madras, the group of Pilgrims went to Bombay to get Hajj Visa. The visa was issued by Saudi Embassy situated at Bombay on May 20, 1960 which was 24 Dhulqaidha in Hijri date. They flew to Saudi Arabia the very next day.

The events of pilgrimage went smoothly, though everyone suffered from a mighty influenza. Especially my great-grandparents.

After performing the blessed act of Hajj, my grandparents returned from Saudi Arabia on June 24, 1960. The first stop was at Bombay and from there to Madras on June 29, 1960. The pilgrims flew to Ceylon on the same day. They were able to return to Male’ on August 16, 1960.

The following is a list of the 12 people who
took part in this trip from Maldives. The list follows the order as mentioned in ‘Mi Dhuvasvaru’ newspaper.