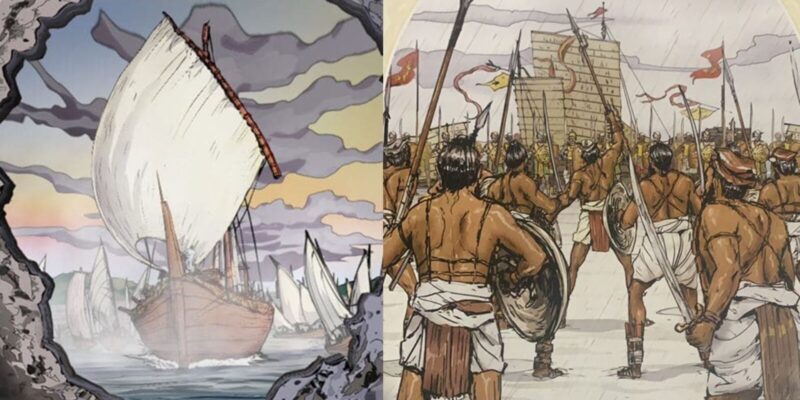 The new year begins with a race for unique calendar trends, but the augmented reality idea of Ooredoo Maldives has gained the most publicity. Since their unique concept of the calendar has become so popular that many individuals have shared their experiences on different platforms.

The name “Tharyhuge Therein Dhivehiraaje “given to this calendar becomes a reality through the application of snapchat.” The national flag drawn on the front page of the calendar carries pride of nationality and the first three sketches containing Thiladhunmathi cultural history are the most enticing thing that really touches the heart. The historical tales of “Cholha Hanguraama” “Uthuru Gandubadu” and the “Roanu Beyrukurun “are portrayed by drawings.

Every month has a sketch that illustrates the historical story. The month of February has been illustrated with ‘Cholha Hanguraama.’. The augmented experience that takes you into the “Choalha Hanguraama” with sound effects is enabled via Snapchat.

As stated in the calendar with the drawing about “Cholha Hanguraama” in the 10th century, northern atolls of Maldives were conquered by cholha indian emperor Raja Raja.  After 100 years later the Siri Mahabarana came with his people and invaded cholha’s from northern atolls and reunite the kingdom as one island nation.

According to ancient sayings, “Maliku” (Minicoy Island) was the 14th Maldives atoll. Later, between the mid-10th and 11th centuries, Cholha Indian Emperor Raja Raja captured Maliku atoll including Thiladhunmathi through a fought on sea battle.

King Siri Mahabarana fought with Cholha during the 12th century and invaded them from the atolls that Raja Raja conquered. The king was given the name “The king of 14 atolls and 200 islands” after the incident. Maluku was considered one of the atolls of the Maldives at the time.

The month of August is devoted to “Uthuru Gadubadu.” Historical data shows that about 9,452 people came to Male’ during “Uthuru Gandubadu”. The people came through 552 ships from Boduthiladhunmathi (northern atolls) to Male’.

There is indeed a great picture of “Uthuru Gadubadu” in the drawings on the calendar for the month of August.

As stated in the month of August “During World War II, when there was crisis named “Boduthadhu”, people from Boduthiladhunmathi (northern atolls) created Uthuru Gadubadu. Kulhudhuffushi bodu Mohamed kaleyfaanu was one of the prominent leaders of the Uthuru Gandubadu event.

The month of September portrays the passionate work of “Roanu Veshun” (making coir rope) by the residents of the Maldives’ northern atolls.

The development of the Ooredoo 2021 calendar concept, drawings, virtual reality created by “Publicity Bureau. The two research analysts, Ahmed Aala and Muhammad Naajih of the Ministry of Arts, Culture and Heritage, provided historical data for the calendar.

According to Muhammad Naajih the drawing depicts an image of “Roanu Veshun” from Kulhudhuffushi, the art of making coir rope is considered one of the traditional handicrafts of the world and a distinctive art form that has been passed down from generation to generation in the Maldives. The most popular island for manufacturing coir rope was Kulhudhuffushi.